Visions & Values
Early on, a document outlining the vision and values behind The Saint John’s Bible was written. These goals and principles have guided the course for the artists and scholars involved, a mission statement for the project.

With the same dynamic relationship that existed between medieval Benedictine houses and the scribes whose talents they engaged, Saint John's Abbey and University and calligrapher Donald Jackson, in collaboration with many from the wider community, will produce a Bible, a work of art, that will ignite the spiritual imagination of believers throughout the world.

A Biblical illumination takes the Word of God and glorifies it by transforming the Word into a complementary art form employing illustration, color and design. The Saint John's Bible is meant to be a prophetic witness to the glory of the Word of God and to humankind's God-given dignity.

In the Middle Ages, monasteries were leaven in both church and society. They were centers of culture and learning which kept the tradition of scriptural reading alive for the whole world. They helped preserve knowledge and culture for the sake of the larger human family.

In commissioning a handwritten, illuminated Bible, Saint John's revives a tradition that has been nearly absent from the Christian world since the invention of the printing press in the fifteenth century. The Saint John's Bible affirms this community's commitment to the study of Scripture, to the book arts and to educational, artistic, spiritual and scholarly pursuits.

Scholars have speculated about the processes and challenges involved in creating a great manuscript. The Saint John's Bible will allow art and cultural historians the opportunity to experiment in historical discovery, to explore a process that was once a core activity of human civilization.

The Saint John's Bible with its spiritual themes and art will reflect the cultural context both of Saint John's and contemporary society. During the time that it will take to create the piece, Saint John's intends for it to be a source of artistic vitality both inside and outside the Saint John's community. 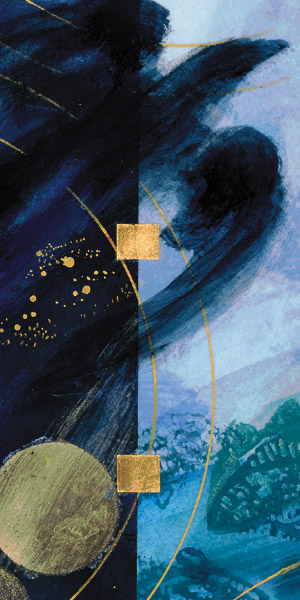