A Bible for the Times
“If the presence of The Saint John’s Bible causes us to pause and remind ourselves of a life beyond contemporary politics and the daily frenzy of the world, then it will meet a universal need.”

Several approaches are taken to representing the divine in the pages of The Saint John's Bible. Reading the Gospels, you will see the images of Jesus range from representational to abstract. In Prophets, the rainbow, that sign of God's enduring promise to Noah, is used to show the presence of God. Gold leaf is used throughout, from Creation to Apocalypse, to direct the reader to the presence of the divine.

Throughout The Saint John's Bible, you'll see the signs of our times. Strands of DNA are woven into the illumination of the "Genealogy of Christ." The Twin Towers in New York appear in the illumination of Luke's parables. Satellite photos of the Ganges River Delta and photos from the Hubble telescope were used to depict Creation. In Acts, "To the Ends of the Earth" includes the first vision of earth as seen from space in a hand-written Bible. What do you see? 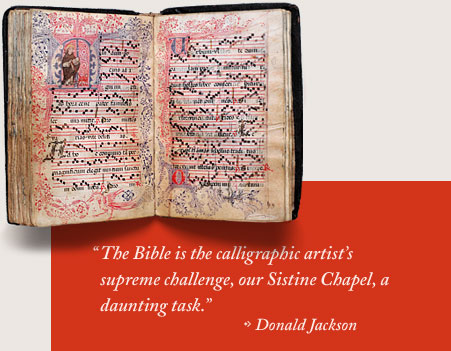