From childhood, Donald Jackson dreamed of creating a hand-written, illuminated Bible. He communicated that ambition to Eric Hollas, OSB, a monk at Saint John's Abbey and then-director of the Hill Museum & Manuscript Library, in 1995. Father Eric brought the idea to the monks, and they embraced Jackson's dream. In Wales, at Jackson's scriptorium, and in Collegeville, Minnesota, among a community of monks living according to the ancient Rule of Saint Benedict, the dream of a masterpiece in art and biblical scholarship took shape. For more on Donald Jackson, click here.

Jo White, Honorary Curator of the Saint John’s University Calligraphy Collection, wrote the date on this two dollar bill and tore it in half the day Donald Jackson first proposed the making of The Saint John’s Bible to Eric Hollas, OSB. The two halves were reunited when the contract was signed. 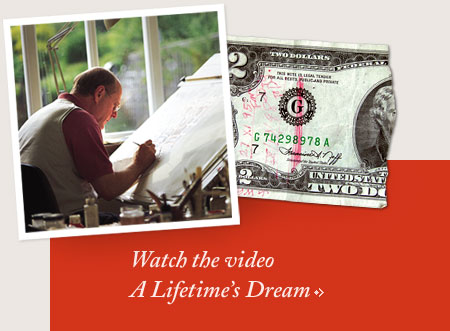 The Saint John's Bible is officially commissioned, funding opportunities are launched and the public is introduced to the project.

On March 8, Ash Wednesday, the first words of The Saint John's Bible are written by Donald Jackson. The verses are from the gospel of John: "In the beginning was the Word, and the Word was with God, the Word was God..."

On April 20, in a special ceremony, the first completed volume of The Saint John's Bible, Gospel and Acts, is presented to the public.

In August Donald Jackson arrives to present the second completed volume, the Pentateuch.

Psalms is unveiled in April at a ceremony at the Minneapolis Institute of Arts. On May 26, a delegation from the project presents a facsimile of the Bible to Pope John Paul II in Rome.

The fourth completed volume, Prophets, is unveiled in conjunction with the opening of the international touring exhibit, Illuminating the Word, at the Minneapolis Institute of Art. Learn more on the touring exhibition.

In July three representatives of Saint John's traveled to Monmouth, Wales, to bring Wisdom Books, the fifth completed volume, home to Minnesota. Donald Jackson formally presents the volume to the Committee on Illumination and Text at Saint John's on September 28th.